Many a times people call us up or send mails about their sighting of UFO. There are two prime sources of such ‘reports’ : - when Venus is at its brightest (and much better if there are thing clouds around) and contrails: trails of condensed water vapour made by the exhaust of aircraft engines. As the hot exhaust gases cool in the surrounding air they may precipitate a cloud of microscopic water droplets. If the air is cold enough, this trail will comprise tiny ice crystals. 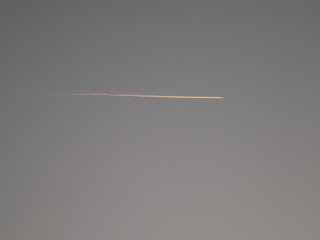 Check this link too
http://cimss.ssec.wisc.edu/wxwise/class/contrail.html

During one the public star party of Akashmitra we saw nice contrail above the Moon which was already above the eastern horizon. The sky was not stable as you can see from contrails are not straight and broke later on.
This was the first image
then the aircraft over the moon.

In this we can see the wind twisting the contrail

And finaly it broke
Posted by Arvind