15 Dec 2013
I am flying to Male, Maldives via Bangalore.  Take off from Mumbai was nearly on  schedule.  It was Air-India flight I had web checked-in and had taken Alpha A to watch the sunrise. Weather was fine almost all the way.  First it was dark sky and then glorious sunrise. Soon breakfast was served - it was not bad at all - it could not have been for one required a special talent to spoil omelet.

This small hillock, excavated from one side is often seen while landing at Bangluru. I was expecting ".. in a short while from now...  " announcement any time.
But instead  the captain announced that the visibility at Bangaluru is zero and we are 8th in the queue for landing, that is after the weather clears up. These were the low level clouds. She told us that we were 65 k.m. from the airport. We hovered for nearly one hour before she asked the cabin crew to "take their station".  Just before the announcement I could see this fellow ahead of us (marked by red arrow) and I suppose we made entry into the clouds where the red arrow is in the third picture is. 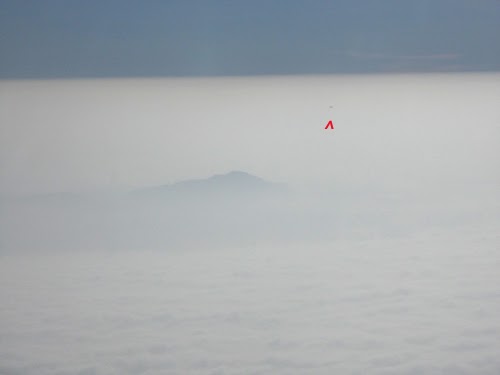 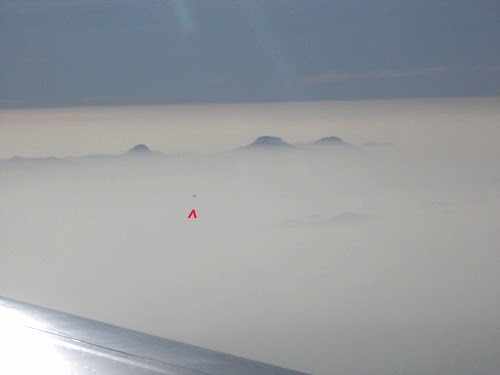 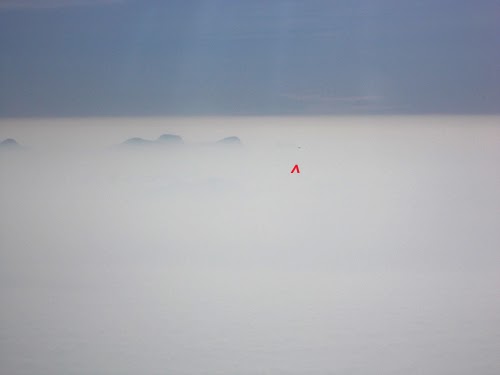 After we landed the Captain very happily told us that only two aircraft landed and both were Air-India. Others went to Chennai.  Sure enough as many of us were scheduled to go to Male from Bangaluru. It was a fun for me.