My account of Sketching the transit of Venus on 8th June 2004 at the 3rd and 4th contact.

On June 8, 2004 I had a wonderful opportunity to observe transit of Venus from Tehran for this I thank my friend Dr Mansour Vaisali

What follows is from my account form my journal  and sketches which I made with my comments.  I made some quick sketches on a small notebook with pen and made notes. Then after the event made the refined sketches.I have no specialize training in sketching  but have been trying my hand.  I had used 2H pencil to make the sketches.

"Its a transit day. Manosur called me at 7:30 a.m. or so and asked me to be at the Sharif University (the place where he had put me in)  gate by about 9:15 a..m. He arrived at 9:20. We first went to Nojum office and collected a telescope and some Nojum magazines and went to a Pardisan Park (Park-e'-Jangali-ye-Pardisan) where they have a bio-diversity museum.  We quickly set up the telescope and magazine/Nojum stall and were ready for the transit to begin 09:48 (Iran time).  After the second contact life was relaxed - not too many people came - the total may have been close to about 300 not more. Met some very nice people who visited us.  There was a TV crew - spoke to the camera.

Since the crowd was less and just about 20 odd people at the 3rd contact I decided to observe the transit and sketch the progress between 3rd and 4th contact.

After the contact we went back to Nojum Office - A meeting was arranged with some official.  But before their arrival I had enough time (more than 30 min) to make my first basic sketches.

In some sense it was a busy day for me but one of the relaxed one too - no dinner tonight. We picked up some food and Mansour dropped me at the University by about 9:30 p.m. and then I took about an hour completing my sketches."

While making the sketches I had concentrated only that area where Venus was touching the solar limb. Though I 'looked around' I did not bother to sketch any other features such as sunspots nor do I remember if I saw any.

The time recorded was Tehran time but again was not very important  It took me about 10 to 12 seconds to make a quick rough drawing and write time.

In the sketched below - the sun is white, the sky and silhouetted Venus are dark.
Could it be possible that I was looking at scattered sunlight form the upper atmosphere of Venus


Just about a minute before the 3rd contact (15:32) at 15:31:03 noted that there were two arms at side of Venus, as if two side black drops and there was a distinct curved white gap between the sun and Venus
The a 30 second prior to the third contact (15:32) at 15:31:03 noted possibly the black drop.
Now this is interesting - Venus is just touching the limb of the Sun, the  sky is dark of course and I see a distinct white curve shimmering just above the solar limb, as if the solar limb is pushed up.
This looked very much like the sun is setting over the sea. The points where the Venus' disk was touching the solar limb appeared to be curved outwards.
15:35:00 - it is like sunset as in sketch 5 above but the shimmering upper portion as in sketch 4 is gone now.
I now see a touch between the boundaries of silhouetted Venus and the Sun
15:38:30 again a little curving like that in #6

Strong wind is shaking the telescope
Changed the eye piece to 12.5 mm
15:43:00 Venus is half gone
Saw the advancing limb of Venus outside the solar limb as a white line making an arc - first I thought that it was a trick played by my eyes but then there were two very clear instances of this observations so I sketched this.
15:44:30 -  It is not a half circle any more but kind of two white curves from either sides
15:45:15 and 15:45:47 One more clear upper (half) ring and one shimmering for just for half a second or so.  Fourth contact was at 15:51
We are nearing the 4th contact  (15:51) and 3 min prior to that at 15:48 I see one more instance of the upper shimmering

A very clear notch was seen - the instances 12 and 13 were almost like mirror images but in negative.
Its gone now 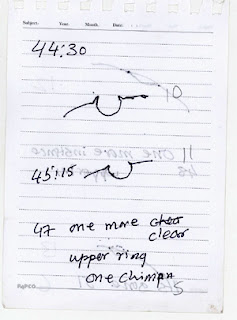